Body language, vocal tones, viewing angles, and more are described while observing the 2016 First Presidential Debate between Hillary Clinton and Donald Trump. This is a detailed look at the non-verbal cues and other staging issues that took place while the candidates exchanged barbs. 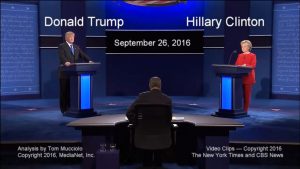 The clips are taken from the online webcasts posted by the New York Times and CBS News. The 8-minute “condensed” video focuses on comparisons between the candidates, taken at various times during the debate.

Talking about health is more than just words, especially when it comes to the communication between health professionals and patients. In a featured podcast on Helen Osborne’s Health Literacy Out Loud blog, Tom Mucciolo shares his perspectives on the importance of nonverbal communication skills in the healthcare environment.

Visit Helen’s site and listen to the podcast interview:

Using Body and Voice to Communicate about Health

END_OF_DOCUMENT_TOKEN_TO_BE_REPLACED

In the third and final Presidential debate of 2012, the candidates were seated in a “discussion” style format. The non-verbal actions of the upper body are visible, especially with respect to the various camera angles and closeups.

In the second of three Presidential Debates, the Town Hall setting offered the candidates the chance to move freely in an open area. This allowed for an in-depth review of of performance issues, including body language, eye contact, hand gestures, proximity, navigation, confrontation and speaking style.

Non-verbal cues dominate during planned or prepared speaking venues and both candidates were prepared not only to discuss the issues, but to directly confront one another in the process.

In this debate, Barack Obama redeemed himself from his previous lackluster performance by adding action, energy and a sense of leadership, while Mitt Romney remained steady, similar to the way he appeared in the first debate. 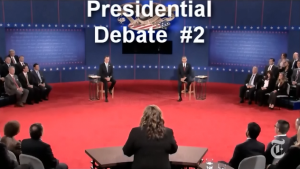 Once upon a time… a speaker claimed it was difficult to get an audience excited about information simply because the content was so boring. Content is never boring — people are boring. A boring presenter delivers boring details. While there are a number of ways to bring content to life, the most obvious method is to smile. You can choose from any of the three kinds of smiles: outside, inside, and in-depth. END_OF_DOCUMENT_TOKEN_TO_BE_REPLACED

Tom Mucciolo is interviewed by Mark Ragan, CEO of Ragan Communications on Ragan TV. This is part of a series (see the “Interviews” category). This clip features a discussion of how to be more effective on camera. END_OF_DOCUMENT_TOKEN_TO_BE_REPLACED

Part of the challenge of interaction is guiding your audience into asking the right question at the right time. While you may be able to anticipate possible questions, based on prior experience with the topic, you really can’t predict which people will ask what, when. But, you can increase your chances if you use a strategy of forced choice.  END_OF_DOCUMENT_TOKEN_TO_BE_REPLACED

The common belief is that when interacting with someone, you should always make as much eye contact as possible. This is true when you are LISTENING. You would like to appear 100% attentive, so making eye contact with the person is critical. But what about when you are SPEAKING? END_OF_DOCUMENT_TOKEN_TO_BE_REPLACED

Have you even been asked a question and you did not know the answer? Whether this happens to you in a presentation, meeting, phone conference, or just in casual conversation, the feeling of not being able to respond immediately can be frustrating. Well, don’t despair! Help has arrived! END_OF_DOCUMENT_TOKEN_TO_BE_REPLACED

Improvisation is mostly associated with theatre, where actors create a story (sometimes humorously) without a predetermined script. To develop consistency, improvisational performers use many techniques, one of which is an exercise called “triggers and handles“. This exercise can be quite useful, especially when developing consistency among “team” members. END_OF_DOCUMENT_TOKEN_TO_BE_REPLACED